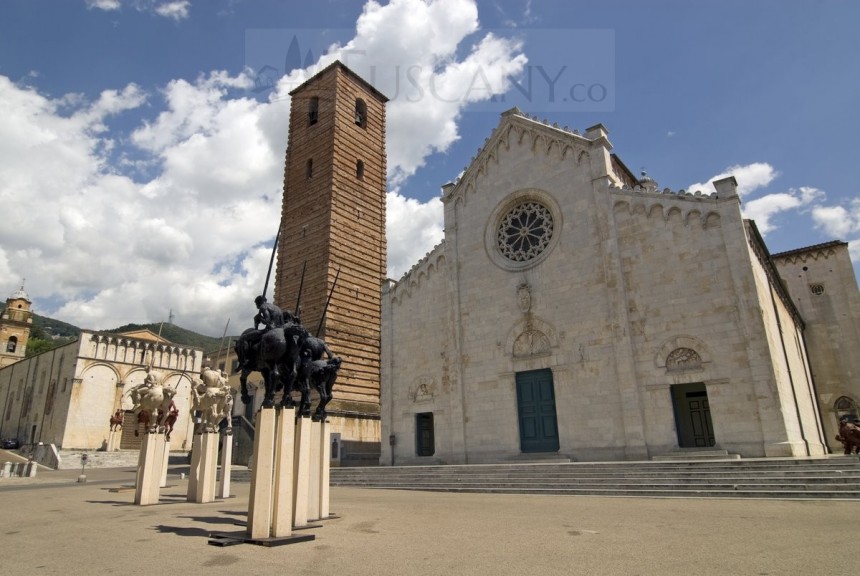 Situated in the north-west province of Lucca is the Tuscan region known as Versilia. This area, perhaps best known for its stretches of long sandy beaches, extends along the coast from Liguria in the north almost to Pisa, which marks its southern extremity. The Apuan Alps form a backdrop to its historical towns, villages and hamlets offering visitors a mixture of mountain scenery and sea.

During the later 1800s this area became popular as a bathing place and Italians would flock here from the nearby larger towns and cities, including Florence and Pisa, to take advantage of the clean air and water for its health benefits. It is from these beginnings that much of Versilia has developed into the thriving holiday destination it is today.

The history of human habitation in this area extends far further back than the 19th century however with some evidence surviving from the Neolithic period or New Stone age. The historical remains more apparent today though for the Versilia visitor are mostly of the latter Roman Empire period dating from the colonisation of the area. This includes many of the roads, villages, towns, towers, castles and walls which can be seen situated throughout the region.

I am text block. Click edit button to change this text.

Besides the wealth of beautiful mountain and coastal scenery in this region there are many places to visit in Versilia for those interested in culture and history besides a wealth of locations offering everything from bustling and lively to tranquil, secluded and surrounded by nature.

As the largest of the Tuscan beach towns and with a bathing tradition dating from 1823, Viareggio is arguably the most famous resort in Versilia. The place name is derived from ‘Via Regis’ (meaning King’s Road) – the name of a still existing road dating from the Middle Ages.

Besides its popularity as a beach resort Viareggio is most well-known for its month long carnival (usually in February) during which giant papier mache figures are paraded through the streets. This colourful spectacle attracts interest and media attention from literally all over the world.

The Roman town of Pietrasanta lies 3 km from the coast and is typically considered to be the historical centre of Versilia. Pietrasanta has always been an important location for artists to work the plentiful marble quarried from the region hence Pietrasanta has acquired the nickname of the ‘City of Artists’ – in fact Michelangelo himself sourced some of his raw material from here. Today the artistic tradition continues and art galleries and exhibitions abound, displaying the works of modern sculptors and artists.

Situated in the city centre is the Piazza del Duomo where the 14th century Duomo (or Cathedral) of San Martino is situated along with the Palazzo Pretorio, Palazzo Moroni, the church of Sant’Agostino and the clock tower which dates from 1560.
Just 3 km from Pietrasanta is the thriving coastal holiday town of Pietrasanta Marina with its 5 km stretch of golden sand – considered by many to be one of the best beaches in all of Italy.

Situated in the centre of the Versilia coast is Forte dei Marmi. This somewhat exclusive coastal town, which lays claim to being one of Italy’s earliest beach resorts, is known today as a choice for more affluent and discerning tourists.
The main square is dominated by the 18th century fortress from which the town takes its name. The fortress was erected in 1788 as a defensive measure under the instructions of Grand Duke Peter Leopold, later to become Holy Roman Emperor, Leopold II.

Alta Versilia, which literally means high Versilia, is usually used to describe the two historically important locations of Seravezza and Stazzema situated in the region’s mountain territory.
Seravezza, whose development and economy grew from nearby marble extraction, is home to the Medici Palace – widely accepted as the most important monument of Versilia – which today houses a museum, library and art displays.
Stazzema is actually a series of small villages rather than just one centre and in these villages can be seen sights of historic interest spanning several centuries. The village of Sant’Anna di Stazzema is home to a 13th century church, a clock tower dating from 1739 and is also the location for the Museum of the Resistance Movement. In 1944 Sant’Anna was the sight of a massacre of Italian civilians by German soldiers in occupation during World War II.

This tranquil lake town was the home of world renowned opera composer Puccini where today it is possible to visit the house where much of his famous work was created – the Villa Puccini. Every summer, the Puccini Festival, which consists of opera, concerts and ballet, takes place at the lakeside open-air theatre to celebrate the town’s link with this famous name.

As would be expected of somewhere such as Tuscany where land and power domination were violently contested over and again throughout history, there are many castles and fortresses in the region of Versilia ranging from fully preserved to romantically ruined.
The most famous of these castles, which date from around 1044 onwards, include:
Malaspina Castle – Massa
Malaspina Castle – Fosdinovo
Verrucola Castle – Fivizzano
Brunella Fortress – Aulla
Piagnaro Castle – Pontremoli
Terziere Castle – Bagnone
In most cases there are still parts of the first original constructions to be seen along with the many additions and reconstructions which have taken place over the subsequent centuries.