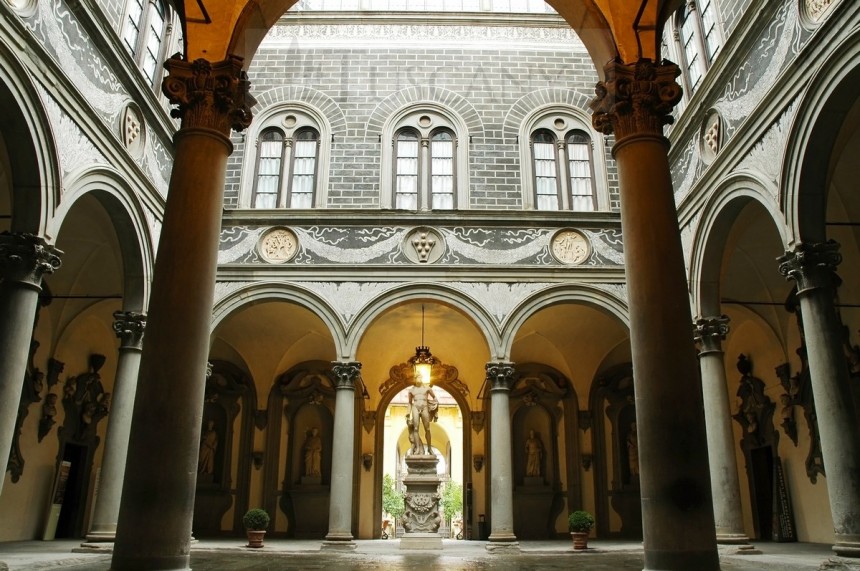 Palazzo Medici Riccardi is also called as Palazzo Medici. It has been named also “Riccardi” by the family which lived in it and expanded the palace after 1659. The Palazzo Medici is located in Florence, in via Cavour, and is a huge palace of the Renaissance period.

The large palace was designed and built by the famous architect Michelozzo di Bartolomeo for the head of the famous Medici banking family, Cosimo de’ Medici well known as “Cosimo il Vecchio” (the Elder).  It was built between the period of 1445 and 1460. The structure is a true piece of Renaissance architecture and depicts the era’s specialty of order, classicism and rationality, of the upper classes.

The beautiful stonework masonry is evidence of the exquisite handwork of the era, which includes a rustication and ashlar effect, highlighting it as the perfect specimen of the different forms of architecture, popular at that time. The tripartite elevation of the structure of the palace, divides the building into stories of decreasing heights, and showcases its beauty of design and architecture of the Renaissance period. The palace presents a beautiful transition from the rusticated stonework masonry on the ground floor, to the smooth and refined stone work on the third story. The effect of the design, presents the building taller than it is with a charming and pleasing effect.  The top of the palace structure is outlined and defined by a massive cornice, which serves to increase the grandeur and beauty of its architecture.

The famous Palazzo Medici is visited by many tourists and art enthusiasts who wish to enjoy the exquisite beauty and architectural elegance of the historical building.

Michelozzo di Bartolomeo designed the Palazzo Medici with a mixed influence and an infused idea of Roman and Brunelleschian principles. The colonnaded and open court which presents the center of the famous Palazzo Medici, was inspired by the designer from the Roman peristyles and cloisters. The palace presents the ideal combination and perfect architectural specimen of a building, presenting the beautiful results, inspired by a designer who incorporated the different prevalent trends of that time, into this exquisite architectural masterpiece.

The front of the building once presented open loggias at the corner along with shop fronts, but they were walled in during the 16th century. The shop windows were replaced by Michelangelo’s inspired designs for “kneeling windows”. The finestre inginocchiate – or kneeling windows – are unusually designed ground floor windows, which sport heavily designed and exaggerated scrolling consoles. They seem to present support to the sill, and are showcased as framed windows, a motif and design which was also copied by the artist on doorways.

The Cappella dei Magi (Chapel of the Magi) is undoubtedly the jewel in the crown of this palace. The chapel – a tantalizing attraction in the frescoes of the palace – is reached by an exquisitely designed seventeenth century staircase, which opens into the mid-fifteenth century chapel, whose harmonious beauty and architectural attention to detail is sure to leave enthusiasts spell bound. This private chapel for the Medici family was realized by the painter Benozzo Gozzoli, which depicted the beauty and elegant designs prevalent in the era and expertly illustrated by the artist to elevate the charm of the palace. The Palazzo presents another major attraction in the Galleria, which is located on the first floor, and overlooks the garden. The gallery was created at the end of the seventeenth century, and presents a scintillating insight into the exquisite artwork of the time. The gallery is intricately decorated by the Baroque art, along with the beautiful and spectacular ceiling fresco, exquisitely designed by Luca Giordano. The Biblioteche Moreniana (Moreniana Library) and Riccardiana (Riccardiana Library) are integral parts of the palace, with access from Via de Ginori.

The Palazzo Medici serves as a tourist attraction and place of interest for art enthusiasts, as several exhibitions are held on the premises to enjoy and appreciate the architectural beauty and heritage. No tour of Florence city is complete without a visit to the Palazzo Medici Riccardi.