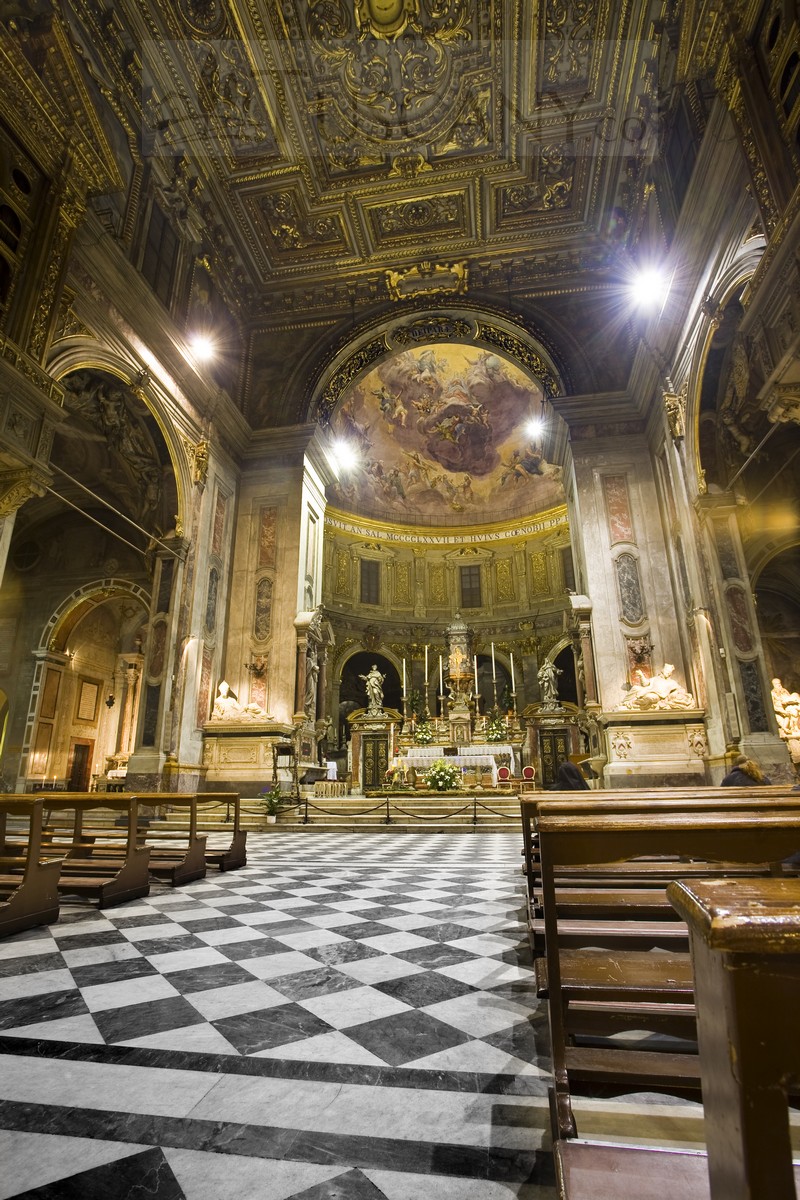 Two years after its construction, in 1252, a painting of the ‘Annunciation’ was hung within the chapel and gained a lot of fame: it was supposedly completed by an angel. In the year 1469, Alberti was commissioned to rebuild the church and construction was finally completed after his death in 1481.

The façade of the basilica was added later in 1601, by an architect named Giovanni Battista Caccini, who was inspired by the façade created by Brunelleschi for the Foundling Hospital (Spedale degli Innocenti), which is also situated within the same piazza. The doors of the church are decorated with frescoes painted by Pontormo in the early 16th century and a mosaic sculpture of the ‘Annunciation’ is displayed there, created by Ghirlandaio.

A lot of sculptures and paintings can be seen within the church as well. It is entered by the famous Chiostrino dei Voti (Cloister of Votives), so called due to the long-term presence of several wax figurines and votives that had been placed hear by the people who came to the church. It was designed by Michelozzo, and frescoed by Andrea del Sarto, Pontormo, Rosso Fiorentino and others.

On the left of the entrance, there is a chapel where the highly famed painting of the ‘Blessed Annunciation’ is preserved. The enclosure was designed by Michelozzo and later constructed by Pagno Portigiani in 1448. The church has a central choir designed by Alberti and Michelozzo, and a baroque interior with colored marble used in the construction of its arches with a golden ceiling.

High windows bring light into the church and between them, 17 artists have created medallions and panels on the walls. Several chapels also hold paintings, frescoes, sculptures, and statues from famed Italian artists, such as the ‘Madonna in Glory’ by Jacopo da Empoli, placed within the 1st chapel, and the Resurrection by Bronzino.

Exiting the church, visitors enter the Chiostro dei Morti (Cloister of the Dead) that was built in the year 1453. It is decorated with numerous frescoes and paintings as well, including; ‘Madonna del Sacco’ by del Sarto, and others. As the major shrine in Florence, it is the burial place of many artists, such as: Pontormo, Bartolini, Franciabigio, etc.

With its Baroque style of architecture and its reverence amongst the locals due to the painting of the ‘Blessed Annunciation’; the Chiesa della Santissima Annunziata becomes a holy place that every tourist should visit during their stay in Florence.