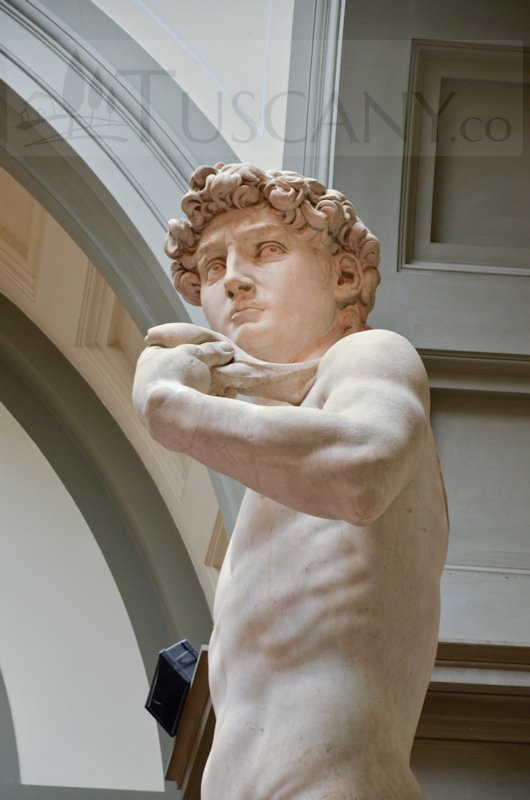 The Galleria dell’Accademia di Firenze, or “Gallery of the Academy of Florence” is an art museum in Florence, Italy. Famed for being home to Michelangelo’s sculpture David, this museum hosts many other works of arts as well. Many of Michelangelo’s works of art are displayed here as well as various paintings, statues and sculptures from the 15th and 16th century. The Galleria dell’Accademia was founded in 1784 by Pietro Leopoldo, who was the Grand Duke of Tuscany.

The original ‘David’ has been displayed here since 1873, when it was brought to the Academy for conservation purposes. A replica now stands in the Piazza della Signoria in place of the original. Other works of art that this museum displays include the famous unfinished ‘Slaves‘, created by Michelangelo and brought to the Academy from the Grand Grotto of the Boboli Garden. An unfinished statue of Saint Mathews is also one of the pieces included among Michelangelo’s works of art.

Many other Florentine paintings of various artists are also on display throughout the Gallery. Some of the artists whose works have been displayed here, include, Paolo Uccello, Domenico Ghirlandaio, Sandro Botticelli and Andrea del Sarto. Giambologna’s ‘Rape of the Sabine Women‘ and Botticelli’s ‘Madonna of the Sea‘ are also in display at the Galleria dell’Accademia.

The museum does not just cater to art pieces. In the less crowded halls, you can see displays relating to the fields of music, botany, painting techniques or art symbols, etc. These displays allow you to gain a vast amount of knowledge in a variety of fields and there is something to keep everyone interested.

Upon entering the Academy, you will find yourself in the ‘Hall of the Colossus‘, where Giambologna’s masterpiece ‘Rape of the Sabine Women’ is placed. This piece was his attempt to create multiple figurines in a single block of marble and is the first example of this magnificent technique. A number of paintings are also hung around the entire hall, Botticelli’s ‘Madonna of the Sea’ being one of them.

The Academy also hosts the Grand Ducal collection of forty musical instruments, so if you’re crazy about music, visit the museum wing belonging to the Luigi Cherubini Conservatory, where you can learn the history of all the musical instruments and find out how they played a key role in the celebrations of the past centuries.

Michelangelo’s ‘Slaves’ is displayed in the appropriately named ‘Hall of Prisoners‘. Near here, you will also find a series of paintings by Alessandro Allori, which depict flowers and symbolism at its best. Moving along these paintings, you will finally get to see the famed ‘David’. In the lower level of the Gallery, one section is dedicated to Florentine Gothic paintings created in the Middle Ages and the Renaissance.

Even though most visitors only come to see the ‘David’, they often miss out on a lot of educational and fun facts by avoiding crowded areas. Visit the first floor of the museum because it is definitely something unique! Here, you can see videos of old painting techniques and sculpture making. You can see how these marvelous works of art came into being and with what techniques. A knowledgeable and fun way of learning about art and its history.

Taking a stroll through a museum can be a relaxing and pleasant experience. Take the time to enjoy the beauty of the art that surrounds you and get lost in ancient times!