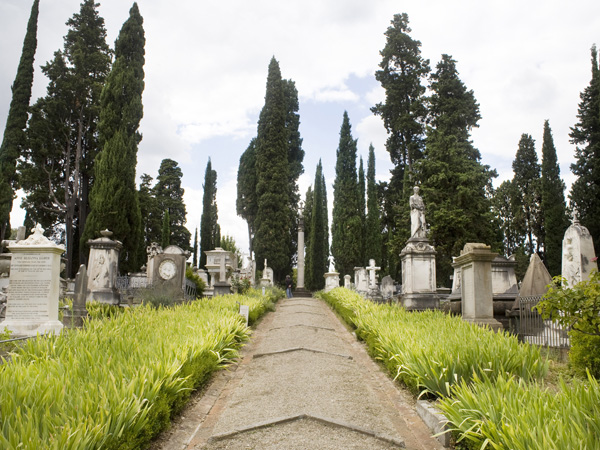 The Cimitero degli Inglesi, or the English Cemetery, is a popular place to visit in Florence, and it has an interesting history. Before 1827, if a non-Catholic or non-Jew were to die in Florence, the only place that they would be able to be buried was in Livorno. However, in 1827, the Swiss Evangelical Roman Church bought a large plot of land and created the English Cemetery.

In 1877, the cemetery was closed as a new law made it illegal to bury any bodies within the city. Recently, they started to allow the burial of cremated remains but not bodies. When the cemetery closed, it became a memorial site, and people would visit to pay their respects and to walk amongst the tombstones and gravel pathways.

One of the most interesting things about the cemetery is that it does not look or feel like many other cemeteries. Most of the other cemeteries would have the graves lined up in rows, but the Cimitero Degli Inglesi has more of a natural feel to it that works with the land rather than fighting against it. The trees and greenery throughout the cemetery help to accentuate this feeling further.

The Cimitero Degli Inglesi is also a great reminder that the history of Florence is varied and the city was not only home to Italians. Many people lived and made their lives in the city over the centuries, and this cemetery is a monument and a memorial to those people.

One will be able to find the cemetery at Piazzale Donatello. Many of the tombstones have some gorgeous artwork, and the cemetery is well worth strolling through for a few photos. The cemetery is also a peaceful and relaxing place to get away from the hustle and bustle that sometimes occupies the popular city of Florence.