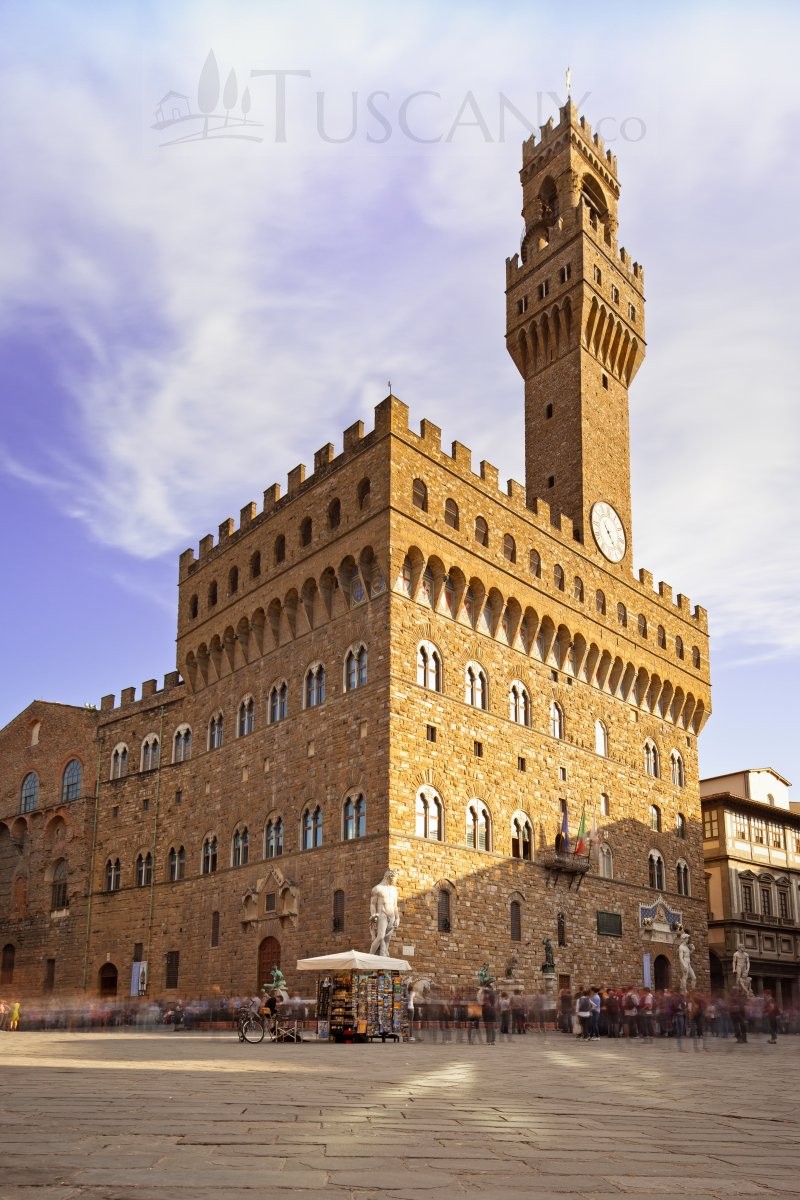 The large L-shaped Piazza della Signoria is one of the most popular squares in central Florence both for visiting tourists and as a place for local Florentines to meet and gather. The piazza is full of important and beautiful statuary as well as being surrounded by a host of buildings of enormous cultural significance. It is also situated close to a number of other important Florentine attractions including the Duomo and the Ponte Vecchio.

The History of the Piazza della Signoria

The piazza, the political centre of Florence for more than 700 years, dates from Roman times when ‘Florentia’ was still just a town. The history however pre-dates even this; during repaving work carried out in the piazza in the late 20th century the remains of a Neolithic site were discovered suggesting humans have been settled here for thousands of years.
The piazza takes its name from the Palazzo Signoria, now known as the Palazzo Vecchio – one of the buildings which border the square.
In 1497 the piazza was the site of the Dominican priest, Girolamo Savonarola’s ‘Bonfire of the Vanities’ in which many items representing the sins of the people such as books, gaming tables, opulent clothing and poetry were burned. Savonarola was later burned at the stake here himself one year later. A marble plaque in the piazza, close to the Fountain of Neptune, marks the exact location where this execution took place.

Palazzo Vecchio – this 14th century building, once called Palazzo Signoria, was formerly the private residence of the absolute rulers of Florence and Tuscany – the powerful Medici family. When they moved across the Arno to their new residence – the Pitti Palace – the last residence became known as the ‘old’ (vecchio in Italian) palace. The Palazzo Vecchio now serves as the city hall of Florence.

The Uffizi Gallery – this palace which dates from the 16th century, built by order of the first Grand Duke of Tuscany, Cosimo Medici, was originally the offices of the magistrates of Florence. Today it is the city’s primary art museum and one of the most famous in the world, housing many priceless paintings and works of art.

The Loggia della Signoria – this columned area in front of the Uffizi Gallery which dates from around 1380 is essentially an open air sculpture display. Here can be seen Benvenuto Cellini’s rather graphic bronze statue of ‘Perseus with the Head of Medusa’. Some historians claim this piece, which dates from 1554, was placed by the Medicis as a reminder of the fate which awaited all their enemies.

Also in the Loggia, among many other sculptures, is Giambologna’s marble ‘Rape of the Sabine Women’ as well as Fancelli and Vacca’s ‘Medici Lions’.

Palace of the Tribunale della Mercanzia – this building built in 1359, which is now the Bureau of Agriculture, was once used by lawyers to decide judiciary cases between merchants. Now housed in the Uffizi Gallery is a painted porch front of this building by Taddeo Gaddi, Antonio del Pollaiolo and Sandro Botticelli.

Palace of the Assicurazioni Generali – this building, which with a construction year of 1871 dates much later than all the others, is one of only a handful of purpose built commercial buildings in central Florence. Most other structures have changed purposes, sometimes many times, in the centuries following their original construction.

Palazzo Uguccioni – dating from 1550, the designer of the palace is unknown although both Raphael and Michelangelo, as well as several others, have been linked to its creation.

Statuary of the Piazza della Signoria

There are many sculptures, statues and relief works placed in and around the piazza. Some of the most famous are:

Hercules and Cacus – dating from 1533, this statue of Bandinelli was placed by the Medicis to illustrate their resilience and power after returning from exile.

Grand Duke Cosimo I – 1595, Giambologna. This bronze depicts the first Grand Duke of Tuscany, Cosimo Medici, from whose time dates the real rise of the Medici’s family 200 year rule.

Reproduction of Michelangelo’s David – the original of this very famous statue can be seen in Florence at the Galleria dell’Accademia (Gallery of the Academy of Fine Arts).