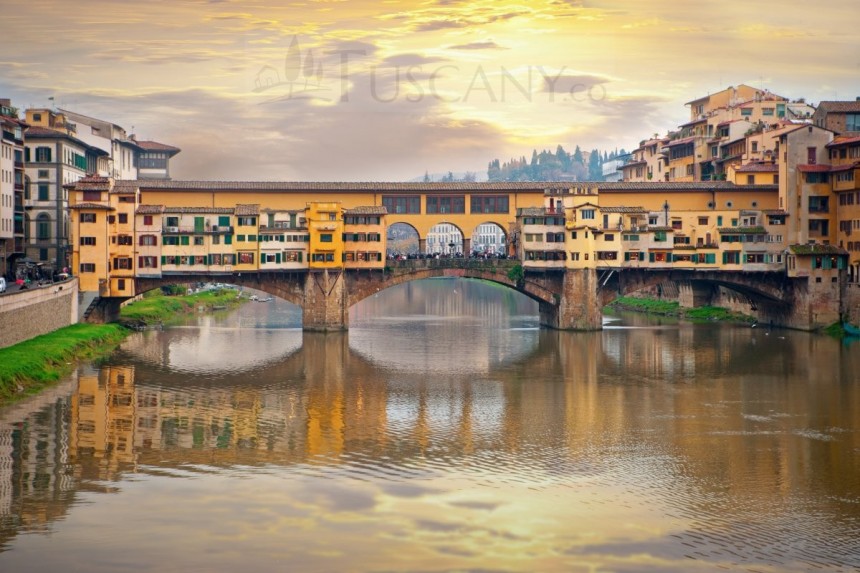 One of the most photographed images in Florence is a medieval stone bridge called the Ponte Vecchio that runs across the River Arno at its narrowest point. The Ponte Vecchio is the oldest of Florence’s six bridges (Ponte Vecchio literally means “Old Bridge”) and it is believed a bridge was built on this spot as early as Roman times, however, the version that currently exists today was built in 1345.

Two earlier bridges, constructed first of stone and wood and then entirely of stone, were washed away by floods. Since then the Ponte Vecchio has managed to withstand the Nazi retreat in 1944 and the devastating flood of 1966 which caused irreparable damage to much of Florence’s historical centre.

Today the Ponte Vecchio is not only a much loved icon of the city, it is also an important tourist attraction for the large number of art dealers, souvenir and jewellery shops it houses on its length. Back in the Middle Ages shops on bridges were common practice. The bridge used to house butchers, fishmongers and tanners which didn’t make it the pleasant shopping experience it is now.

The Medici family however, had a vested interest in clean air and making the Ponte Vecchio a more prestigious area. This is because they used the Vasari Corridor to get from Palazzo Vecchio to the Palazzo Pitti, and the corridor ran directly over the shops on the Ponte Vecchio. They didn’t like the stench emanating from the shops so an order was decreed that only goldsmiths and jewellers were allowed to sell on the bridge.

Interestingly it is on the Ponte Vecchio the term ‘bankrupt’ is said to have originated. If a merchant couldn’t pay his debts his table was broken so he couldn’t sell anything else. This was known as “bancorotto” – broken bank.