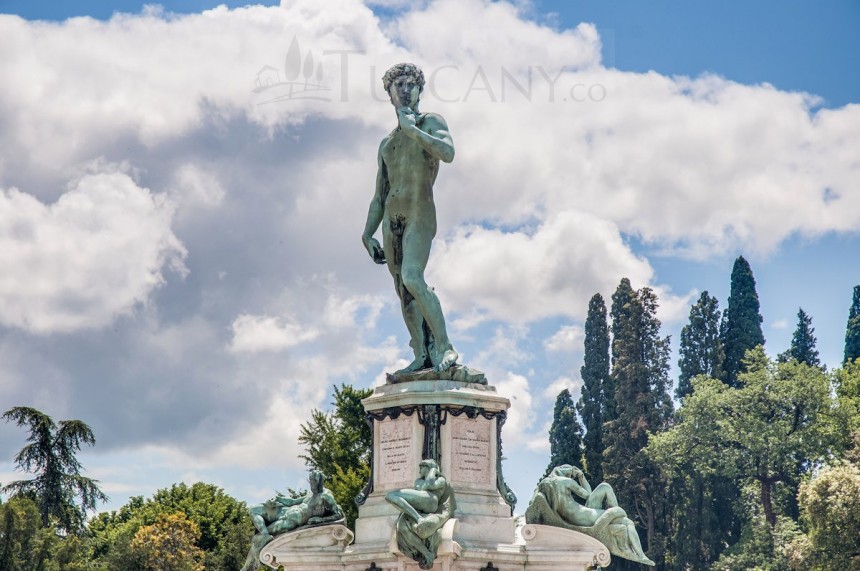 Perhaps the most famous view of Florence is that from Piazzale Michelangelo in the Oltrarno district. The sweeping panorama from this terrace has been photographed by tourists continuously throughout the years and shows no sign of losing its popularity. On a clear afternoon from Piazzale Michelangelo the view of the city’s landmarks: the Ponte Vecchio, Palazzo Vecchio, the Bargello and bell tower of the Badia Fiorentina and, of course, the proud and majestic Duomo, is simply breath-taking.

It’s a pity then that Piazzale Michelangelo’s true purpose was never realised. Originally the terrace was built as a dedication to the sculptor Michelangelo Buonarroti and meant to house a museum of his artworks. For reasons unknown, this never came to fruition.

The neoclassical terrace, designed by architect Giuseppe Poggi, was constructed during a period of 19th century urban renovation and now mainly consists of a carpark and observation platform. While the loggia, or museum as it was initially intended, is a panoramic restaurant.

Other remnants of the original intent are there as well, namely bronze copies of Michelangelo’s sculptures, David and the four allegorical statues representing day, night, twilight and dawn. The originals, all in white marble, are at the Galleria dell’Accademia and the Medici Chapels at the San Lorenzo Basilica respectively. 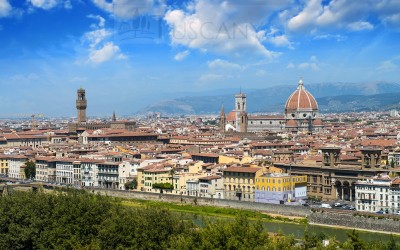 Still there’s no denying Piazzale Michelangelo is the best place to view Florence. If you need some spiritual relief from all the food carts and souvenir stalls there is the lovely 11th century church, San Miniato al Monte which looks down on the Giardino delle Rose (Garden of the Roses). The church is reached by several flights of stairs from Viale Galilei.

Piazzale Michelangelo itself can be accessed either by walking across the Ponte Vecchio to the south side of the river then up the stairs, by car along Viale Michelangelo, or by the ramps from the Piazza Giuseppe Poggi, in the San Niccolò district.