To most people, the name Chianti is associated with a variety of popular Italian wine but it is also the name of the central Tuscany region from which the wine comes.

Olive groves, vineyards, rolling hills and ancient hill-top towns are the signature landmarks of this charming area which lies between Florence and Siena. The area was first settled by the Etruscans – the ancient Italian people who inhabited this region and from which the name ‘Tuscany‘ is derived – and then by the Romans into whose republic that of the Etruscans was assimilated around the first century BC.

The control and ownership of the Chianti area was fiercely contested almost continuously from the Middle Ages until the Renaissance by the leading powers of Siena and Florence. The many castles, fortresses and defensive structures which are found throughout the region bear testimony to this. 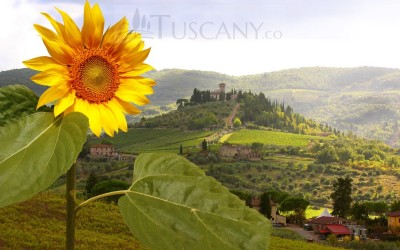 As might be expected in a region so well known for its wine production, many thousands visit Chianti every year for the sole purpose of wine tasting. Vineyards, farms and wine cellars are everywhere and so numerous that they are almost impossible to avoid.
There are many organised tours on offer to visitors which range from a few hours to days long. Alternatively you can plan your own wine tasting tour taking in any particular area or wineries that most interest you. Free information is available from Chianti tourist information offices with regard to this which include suggested itineraries and maps.

Chianti has such a wealth of cultural and historical attractions along with countless opportunities for sampling the best of the region’s food and wine that it would be impossible to list them all here. However, below is a small sample of some of the more interesting and popular places and while travelling from place to place you will quite possibly stumble across many more treasures – those both well-visited and some rather more hidden.

If you are arriving in this region from Florence then the chances are that Greve is the first of the Chianti towns you will come to and it is for this reason that it is often referred to as ‘The Gate to Chianti’.

Greve was once nothing more than the market place for the inhabitants of the beautiful Castle of Montefioralle, which sits above Greve. From these humble beginnings Greve flourished and in the centuries which followed became a town in its own right.

The site of the ancient market place is still the town’s focal point – the Piazza Matteotti – a strangely triangular shaped area surrounded by porticos which now house cafes, restaurants, artisan workshops and gelaterias. The Piazza Matteotti is also the location of the Santa Croce church complete with 14th century frescoes, the Palazzo del Comune and the large statue dedicated to Giovanni da Verrazzano, the famous explorer, who was born nearby.

This hamlet, originally a walled castle dating from around the early 11th century, is one of the oldest settlements in Chianti. The castle’s outer walls still enclose the hamlet where wandering the narrow cobblestone streets inside can feel like stepping back in time.

Right in the southern extremities of the Chianti region, close to Siena, lies the Mediaeval city of Castelnuovo Berardenga, the site of the famous battle of Montaperti in 1260 between the forces of Siena and Florence.

The city takes its name from the ‘new’ castle built here in 1366 and the Berardo family who governed the city. Many of Castelnuovo’s churches, villas and monuments which date from the 1300s and 1400s and are popular tourist attractions were built during the time of the Berardo family rule.

Situated in the centre of the Chianti region, Volpaia is yet another of the area’s numerous hill-top fortresses and ancient Mediaeval villages. This walled castle which dates from around the 10th century, exhibits a dark colour which is rarely found in this region.
Volpaia’s location placed it at the front line of the wars between Florence and Siena and as a result it saw much action, particularly during the 15th century.

It is thought that the history of settlement here in Castellina in Chianti extends back beyond Roman times to that of the Etruscans. The fortress and walls which can be seen today are particularly large, dominated by a huge 14th century tower.
A walk around the ancient streets here will show many buildings which belonged to the aristocrats of Florence. Other sights of particular interest are the Church of San Salvatore which contains both a 15th century fresco and a wooden statue of Christ, the underground tunnel of Via delle Volte and a small Etruscan museum.