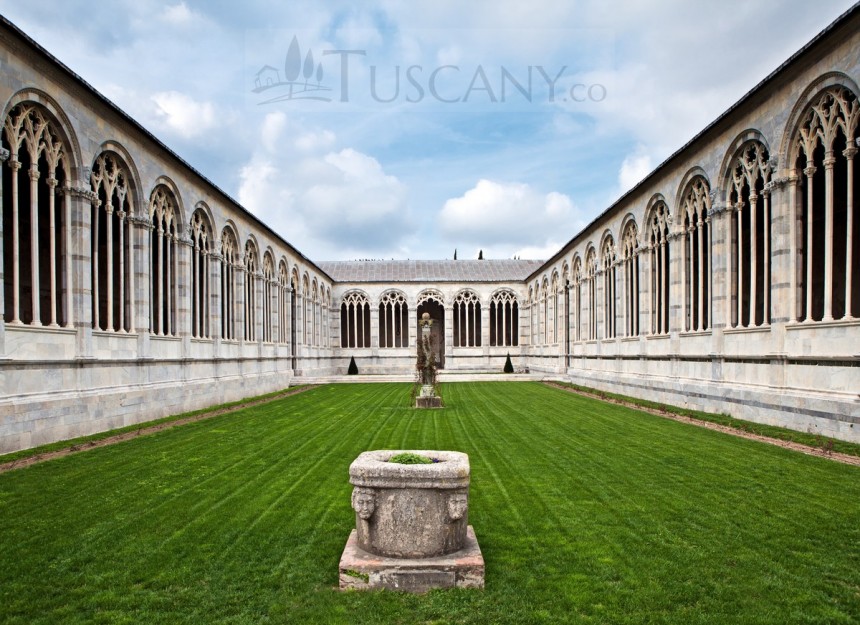 The Camposanto Monumentale (monumental cemetery), is also known as the Camposanto Vecchio or “old cemetery”. It is one of the most important historical edifice, located in the northern side of the Piazza dei Miracoli (the Cathedral Square), in Pisa, Italy.

The Campo Santo is also known as the “holy field”, on account t of its historical legend of having been built upon the soil brought from Golgotha (Cavalry). The Golgotha was a site reputed to be located right outside the walls of Jerusalem, where the Christ was crucified.  The sacred soil was brought back by Ubaldo de’ Lanfranchi, who was the archbishop of Pisa, from the 4th Crusade in the 12th century. The burial ground of the famous Camposanto Monumentale Pisa, is situated right above the remains of the old baptistery of the Church of Santa Reparata.  The burial ground has a reputed legend, which claims that any body buried in it will dissolve in only 24 hours.

The Camposanto cemetery was built over the earlier burial ground, by the artist Giovanni di Simone in 1278. The cemetery was originally designed to be a church, to be named Santissima Trinita (the Most Holy Trinity), but the idea changed during the construction of the project. The western part of the Camposanto was built originally, and the eastern part completed later, resulting in the completion of the project in 1464.

The cemetery is a huge, oblong structure and a beautiful specimen of Gothic architecture. It has been designed with 43 blind arches in the outer wall, which make it a sight to behold for tourists! The building has two doorways, with the right one crowned by an intricately beautiful Gothic tabernacle, which presents the Virgin Mary with Child, encircled by four saints. The artistic beauty and exquisite detailing, make it an elementary sight for every tourist. It was designed by a follower of the famous Giovanni Pisano, in the later part of the 14th century, as the original entrance door to the Camposanto.

A large number of tombs are located under the arches, while a few have been built on the central lawn. The inner court of the building has been designed with elaborate and intricate round arches, with plurilobed tracery and beautiful slender mullions, which add to the artistic beauty of the historical building.  The Camposanto has three chapels, named as the Chapel Ammannati, Chapel Aulla and the Chapel Dal Pozzo. The chapel Ammannati was built in 1360, and named after a teacher in the University of Pisa, Ligo Ammannati. In the chapel Aulla, an altar was made by Giovanni della Robbia in 1518, which houses the original lantern seen by Galileo Galilei in his time. The chapel Dal Pozzo was built on the orders of Archbishop of Pisa Carlo Antonio Dal Pozzo, in 1594. The chapel has an altar and a little dome dedicated to St. Jerome.

The cemetery was originally designed to be surrounded by the large collection of Roman sarcophagi, which were located around the cathedral and sometimes attached to the building itself. In order to preserve the 84 remaining sarcophagi along with the Etruscan and Roman sculptures and urns, the historical relics have been moved to the vestry board Museum.

The Camposanto has a collection of historical relics, which were translated in 2009, to include around eleven of the twelve Apostles, a thorn from the “Crown of Thorns” of Christ, two pieces of fragments from the “True Cross”, and a piece of the garment of Virgin Mary.

The most admirable feature of the Camposanto Monumentale Pisa, are the beautiful frescoes on its walls. They were created in 1360, but a bomb strike in 1944, resulted in a fire in the cathedral, which damaged the magnificent fresco specimens. After World War II, restoration work was done and the damaged roof and frescoes were built to restore their prior glory. After being restored the frescoes are being transported back to their original locations, in order to let the tourists and enthusiasts enjoy the real exquisite beauty of the Camposanto.

The cemetery is an essential tourist site for every tourist who wants to really enjoy the true beauty of Tuscany.