Battistero di Pisa (Baptistery of Pisa) – or Battistero di San Giovanni (Baptistery of St. John) – is one of the tallest religious buildings in Pisa, Italy. It is situated in Piazza dei Miracoli (Square of Miracles). It was constructed between the years 1152-1363, and was built in place of an already existing baptistery. Surrounding this imposing and impressively structured baptistery are the famous buildings of Pisa, namely; the Tower of Pisa, and Duomo di Pisa (Cathedral of Pisa). The baptistery can be seen from these two places and is an impressive sight to behold.

Designed by Diotisalvi; proof of which can be found on the two pillars where he signed his initials. These pillars are situated inside the building and have been dated 1153 (Pisan calendar). The baptistery is a cross between the Romanesque and the Gothic style of that era.

The rounded arches of the lower register have been designed in the Romanesque style, while pointed arches have been constructed in the upper registers, giving it a more Gothic look. These arches give the baptistery the elegance it needs to overcome that imposing look.

This combination of Romanesque and Gothic style has given the baptistery certain distinct features which set it apart from others. The unique manner in which it has been designed is evidence of intricately built Italian architecture. The baptistery has been built by utilizing white marble, which gives it a look of splendor.

When you enter the cathedral, you will find an Octagonal font right at its centre. This font was designed and constructed by Guido Bigarelli da Como, in 1246. At the centre of the font is the imposing statue of St. John, which was sculpted by Italo Griselli. The monumental structure is further defined by the pulpit which is located to the left of this octagonal baptismal font.

Nicola Pisano, built the Pulpit of the baptistery, one of the first masterpieces he ever made. The sculpture and architecture have been perfectly fused together to form an impressive series of images. The classical form of Hercules is one of the most famous pieces to view. The marble balustrade is structured in a hexagonal shape. These sculptures are located in three places; the bottom, where columns of lions are situated and at the center of human figures. 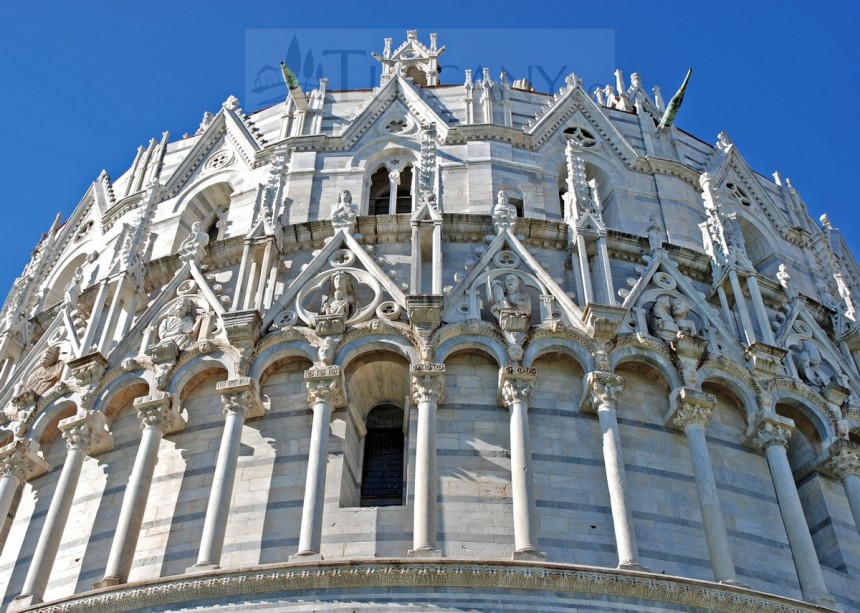 Two magnificent columns flank the portal which is the entrance to the baptistery. The portal is built in such a manner that it faces the façade of the cathedral. Once you walk inside, you will see some works which represent the Byzantine style. Two tiers divide the linter each representing a significant event.

The first tier, situated on the lower end, shows the life of St. John; the Baptist after whom this baptistery was built, while the second tier, situated at the upper end, depicts the Christ, standing between Madonna and St. John, surrounded by angels.

The interior of the baptistery is breathtaking in its style and design. Although it is not overly decorated, yet the beautiful way in which it has been built, catches the eye of all, who visit it. Two centuries ago, this masterpiece was completed to form one of the most fabulous buildings in the history of Italian architecture.

An exterior roof has been built on the interior one, pyramid shaped, in the shape of a cupola which is the reason for sounds resonating within this chamber.

There are innumerous paintings situated within this baptistery, all depicting various important events of history, like The Last Judgment, Crucifixion, Adoration of Magi, etc. You can find many examples of classical art along with modern day Gothic culture.

Initially, the design of the baptistery was supposed to be different than how it was designed in reality. It was supposed to be similar to the structure of Holy Sepulchre, but Nicola Pisano, gave it a more contemporary look, once he started working on it.

Battistero di Pisa is a place full of history and one that should be on your list of “Places to visit in Pisa”. So whenever you make a plan to take a tour around Pisa, make sure to visit this magnificent building.