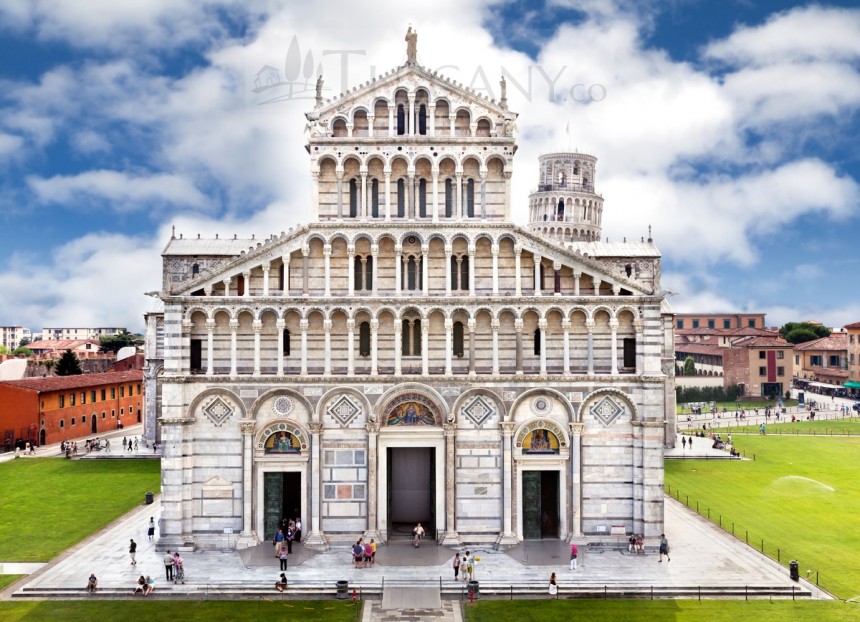 Duomo di Pisa (Cathedral of Pisa) is a masterpiece of the Pisan Romanesque era. It was built around the middle of the 11th century. Currently the church is referred to as The Cathedral of Santa Maria Assunta as it was dedicated to her. The cathedral is evidence of the wealth possessed by the Republic of Pisa which was used to construct this magnificent cathedral.

Once the construction was completed, the cathedral became a splendid place of worship. The church was built outside the city walls, near the Leaning Tower of Pisa, as proof of the might of Pisa. At the end of the 11th century, the church passed from just a simple church, to becoming a primate cathedral, having received the title of Primate Archbishop Daiberto. This title was bestowed upon the church by the Pope Urban II.

The work on the cathedral continued and in the beginning of the 12th century it was expanded. The faced was sculpted by Guglielmo and Biduino under the guidance of Rainaldo. Over the years, this cathedral had been restored several times which has led it to look the way it does today. In 1595, the building was nearly destroyed because a fire erupted within the cathedral and spread far. The roof had collapsed and the doors had blackened. This was the first time when the restoration of the church took place. The construction, of the roof along with three intricately designed doors, took place during the following year. After this, paintings started being added to the interior of the cathedral.  These paintings depicted significant events of the past, along with stories of Pisa and important saints.

The building is designed in the shape of a Latin cross with 5 aisles with two galleries, an apse, 3 naves, a transept and a dome. It is built in a type of style which is similar to the great Islamic mosques of that era. The elliptical dome is made of black and white marble. 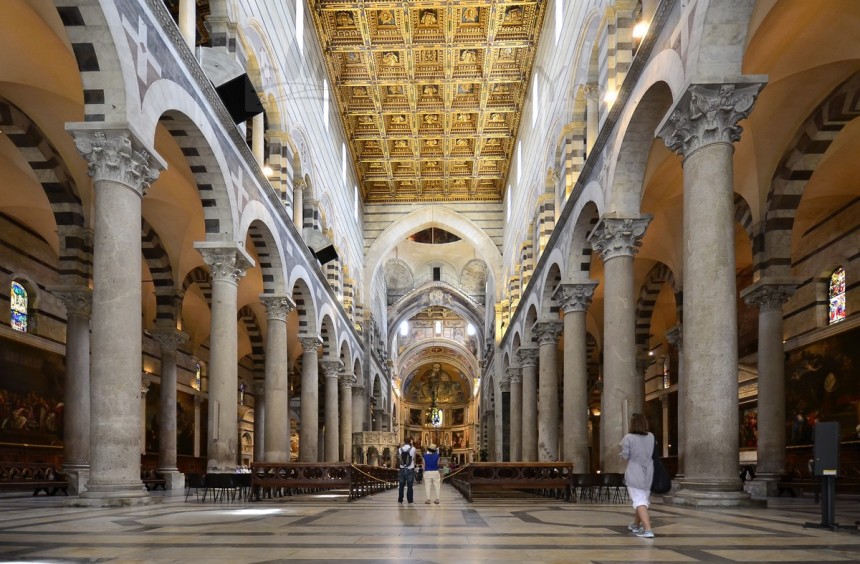 The outer part of the cathedral has been designed by making use of mosaics, marbles of different colors, artistic bronze colored object and other material which makes the exterior of the cathedral a spectacular sight. The architecture of the church has been greatly influenced by Muslims, proof of which can be found in the arches of the building. Rainaldo, himself, built the beautifully designed facades, with a touch of the multicolored marbles here and there. In front of the mullioned windows are loggias which have been framed by using marble. The bronze doors of the facade remind you of the Florentine era, whose artists designed these with precision.

The interior of the cathedral has been designed using black, white and grey marbles. The ceiling is made of wood which has been painted with golden a coat of arms over it.

The dome is present in between the transepts, which has been painted to depict the Virgin in Glory with Saints by the artists Horace and Jerome, during the years 1627-1631.

The columns have been made in Corinthian style, which were taken from the mosque of Palermo. The spoils from various battles have been used in the building of this church. The painting of Christ, the Virgin and St. John has survived centuries and is one of the most beautiful pieces present within this church. It includes even the most delicate details. There are innumerous paintings all over the church which have been made with geometric patterns encasing them to set each apart from the other. Another one of the masterpieces that must be observed is the pulpit which shows a series of events with breathtaking accuracy.

So if you want to get a feel of true history or just feel awed, then Duomo di Pisa is the place to visit.