Piazza Anfiteatro or the Amphitheatre Square is located in the heart of the Tuscan city of Lucca, in Italy; and is aptly named after the Roman amphitheatre on the remains of which it was created. The original amphitheater existed in this location since the 2nd century and the square developed from the Middle Ages onwards.

When the amphitheatre stood tall in the Roman era, it used to be a centre of town where people gathered to watch the games and events. Even today, the square holds its significance as this elliptical shaped piazza is the centre of the town and is always bustling with activity.

The construction of the amphitheatre began in the 1st century during the rule of Emperor Claudius and the resulting structure was grand, having fifty four arches and the space to accommodate nearly ten thousand spectators when they came to see the games. 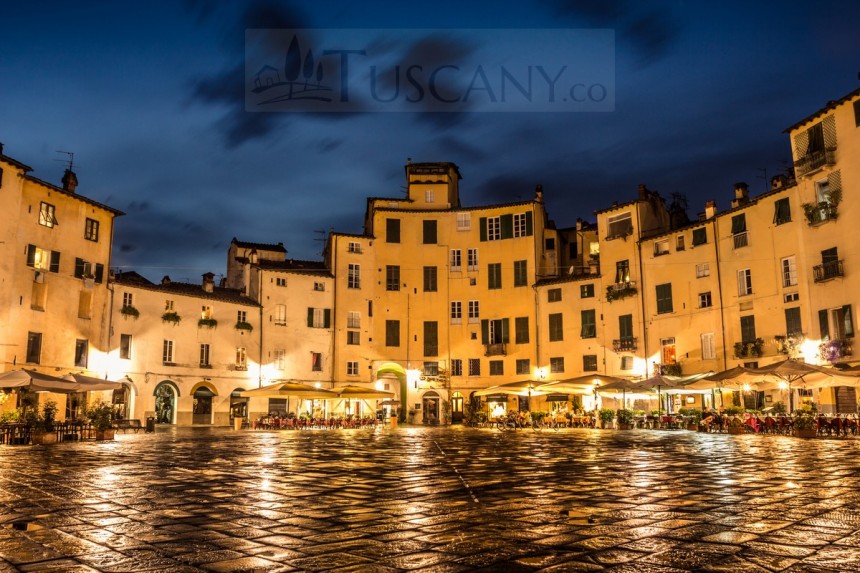 During this era, the square was called ‘parlascio’, which was a form of the Latin word ‘paralisium’ (amphitheater). A lot of public meetings were held here in the open space and buildings were later built to surround and enclosed the space, creating the piazza. Most of the buildings of these times were store houses used to stock gun powder, salt and other wares.

In the 19th century, the architect Lorenzo Nottolini, was commissioned to rebuilt and revive the piazza based on the roman ruins of the amphitheatre. It was due to the designing of Nottolini that Lucca gained a new open square that was just as big and as spacious as the ancient ruins on which it stood. He opened the square into its current elliptical shape and it became an urban centre for market and stores.

The Piazza Anfiteatro was the central space for the town market, but in the beginning of the 20th century, the market was finally shifted to another location within the city. However, the piazza was dedicated to the market and hence, it is still sometimes known by the locals as Piazza del Mercato (Market Square).

Entrance to this ancient and amazing piazza is only possible through one of its 4 doorways, with only the lowest one belonging to the original structure of the amphitheatre.

There are two specific features of this square that tourists should see. The first thing that most visitors notice is the fact that the floor of the piazza is nearly 3 feet higher than that of the arena because it has been built on the foundations of the amphitheatre. The second point of interest is the cross engraved into the floor of the piazza at the intersection point of the four entryways.

Regardless of how many changes this piazza has faced, it still remains to this day, a truly magnificent work of architecture and some the remains of the old amphitheatre can be seen just beyond the walls of the piazza.

So if you decide to visit Lucca, do not miss seeing the hustle and bustle of this central market square, where the city and its people come alive!