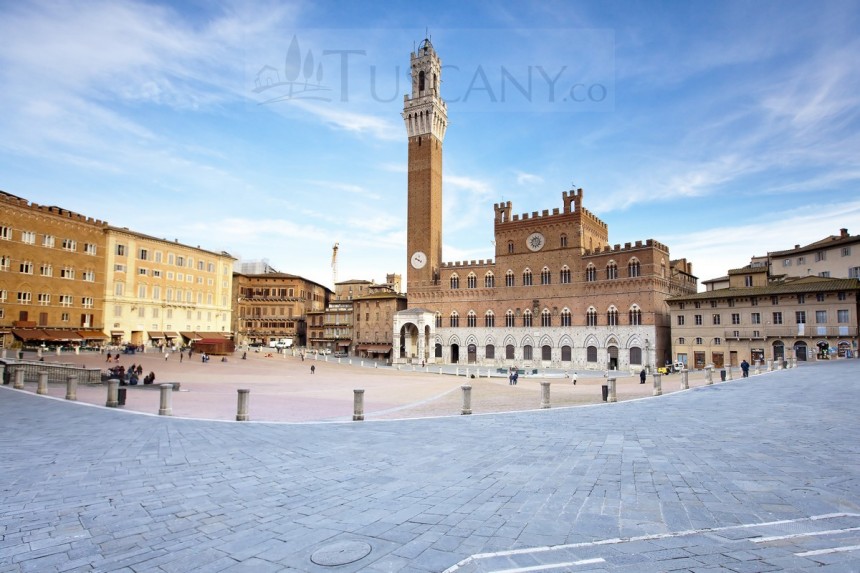 The Piazza del Campo in Siena is widely regarded as one of the most beautiful squares in all of Italy due to its architecture, bell tower and overall shell-shaped form.

As well as its global fame for its aesthetic beauty the Piazza del Campo is also significant as the site of a twice annual horse race whose beginnings can be traced to Mediaeval times.

Unlike various other Tuscan piazze the Piazza del Campo is not thought to have had any great significance in Roman times even though Siena itself had Roman connections. The city is said to have been founded by Senius, son of Remus hence Siena’s emblem is the she-wolf which suckled Romulus and Remus (the mythical founders of Rome).

The History of Piazza del Campo

There is also some evidence to suggest that it may have been the site of Etruscan settlement – the name given to the ancient Tuscan people who preceded the Romans and from which the area gets its modern name.

The piazza, as it is seen today, owes its appearance to the time of the oligarchy of the Governo dei Nove or the Government of Nine who administered Siena from 1287 until 1355 although it had traditionally been used as the site of a marketplace before this era.

The red brick fish bone paving of the piazza, which was started in 1327, is divided into nine definite segments to represent the Governo dei Nove.

The square is dominated by the facade of Siena’s communal palace – the Palazzo Pubblico. This curved frontage with the impressive Torre del Mangia rising from it along with other turrets can have quite a disorientating effect – tricking the eye into thinking the buildings and roofs are leaning rather than perpendicular.
Built as the official seat of the Government of Nine, today the Palazzo Pubblico is still home to the city’s local government, including the mayoral offices. It also houses the Museo Civico where visitors can view many paintings, sculptures and frescoes belonging to the city.

This 102 metre high bell tower which dates from 1325 is one of Italy’s highest Mediaeval towers.

Built in the form of a rectangle and surrounded on all but one side by bas-reliefs, this marble fountain dates from 1419 and marks the end of Siena’s ancient water and irrigation system. The original sculptures of the fountain are now housed in the Ospedale di Santa Maria della Scala. Their replacements, which you see today, date from the 1800s and are missing two of the original nudes considered inappropriate by the more prudish Sienese of the time.

Chapel of the Virgin

Actually a loggia at the foot of the Torre del Mangia, this small “chapel” was built in 1348 as a religious offering to mark the end of the city’s “black death” plague.

The other main buildings surrounding the square and which are now principally the premises of cafes and restaurants were once the houses of Siena’s rich and influential. One historically significant feature which can be seen is the uniformity of the roof lines – something rarely seen in this area. Typically, the ancient Mediaeval towns of Tuscany were marked by varying heights of a series of towers. These acted as a kind of status symbol with the highest towers marking the residences of the richest. One of the best existing examples of such differing towers can be seen at San Gimignano in the province of Siena. 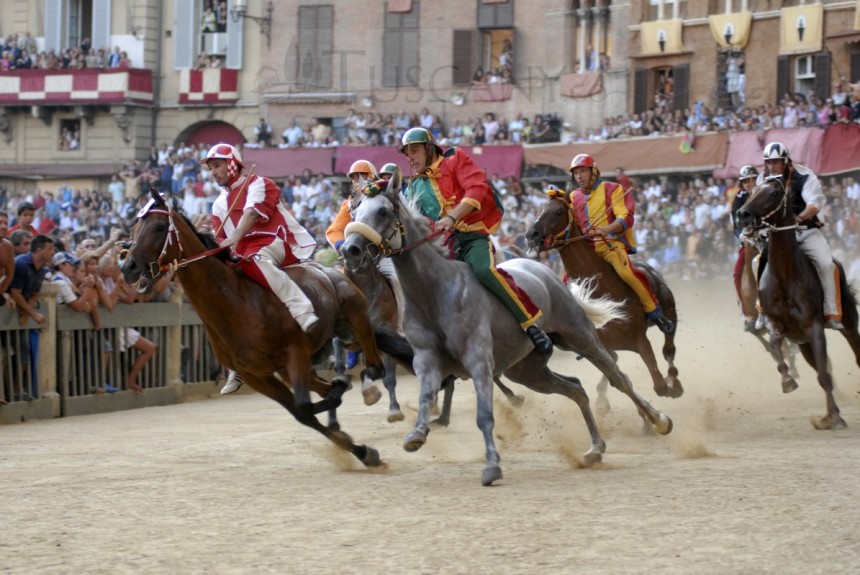 Twice yearly, in July and August, dirt and sand are brought in and laid around the edges of the Piazza del Campo to transform it into a horse racing track. This traditional race, which has ancient roots, still showcases the fierce rivalry which still remains between the 17 wards of the city.

Contenders are all armed with whips which they are allowed to use on their own horse as well as other horses and riders and winning is as much about impeding other riders as is about being the best.

All of Siena turns out to watch the race which means the square is crammed full and victory is followed by long parties where the winner’s standards are proudly displayed for the year until the next races.