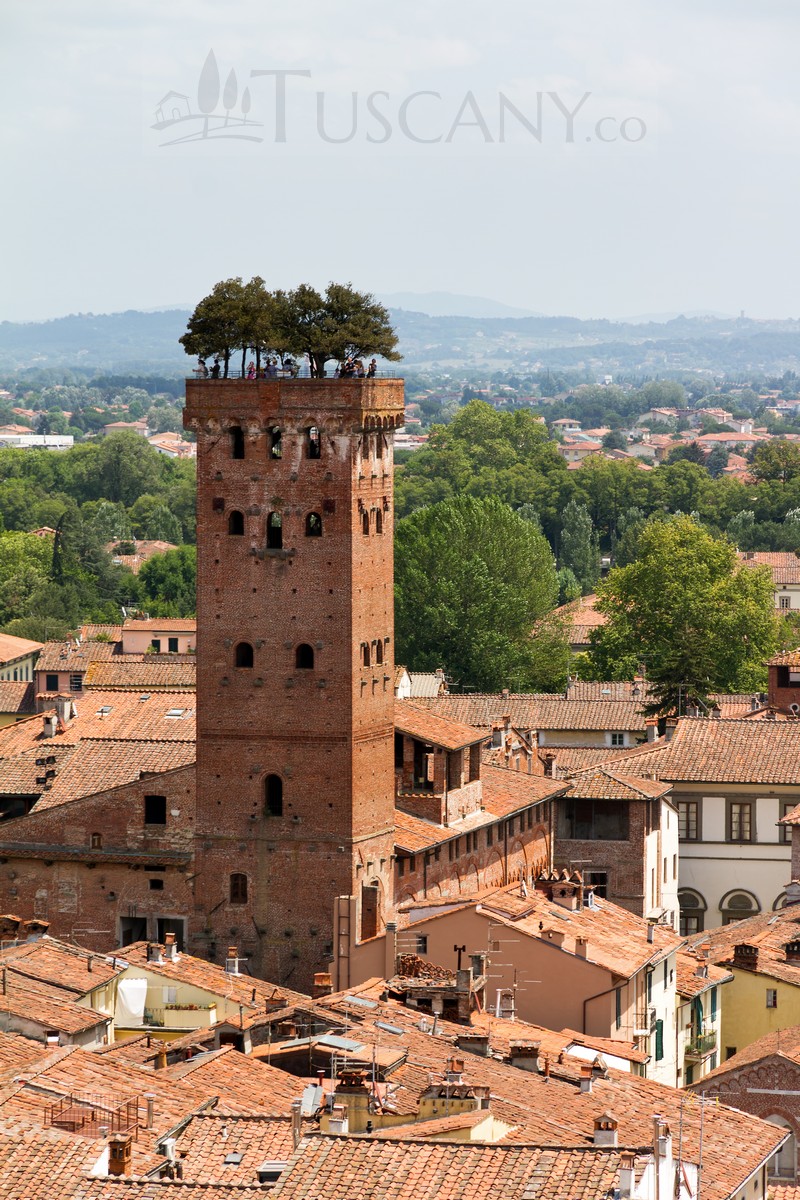 If you ever go to the magnificent historical city of Lucca, you might witness a forest in the sky. It does sound absurd, but it is actually true. You can spot oak trees growing from the top of the tower from far away. That structure is the Torre Guinigi or the Guinigi Tower. Built of bricks that are a stunning red color, the top of the tower is home to many ancient Holm oaks. At 125 ft high in the sky, the views from the tower roof are one of the most stunning sites you will ever set eyes on.

The Torre Guinigi is one of the few tower houses that were built in Lucca. The tower was first constructed somewhere around the year 1384 by rich silk merchants. At that time, the rooftop garden was obviously not here, but there is no certainty as to when it came into being. Many historians believe that it probably dates back as far as the 1600s. This was observed in an art piece that features the city, and belongs to this period.

In the past, Lucca was home to 250 defensive towers, all of which featured a stunning façade and marvelous views from the top. Unfortunately, only a mere 9 of these remain today. Almost all of the towers were constructed in the period when Italy was experiencing the plague, and Tuscany was going through a lot more. Diseases, raids, political outbursts, episodes of violence, there was a lot that Tuscany had to handle and the entire region was turned upside down. All of this took place in the 14th century, which is now famous as the period of Interesting Times in Italy. At that time, everyone felt a personal defensive tower to be their safest haven.

The central region in Lucca goes as far back as the Roman Times, but it was not until the Middle Ages that it reached its glory when the entire region became a major trade hub.

Ever since Lucca remained independent from 1119 till 1314, when it was raided by a local condottirere, Castruccio Castracani, whose ambition led him to conquer all nearby areas including Florence. He spent of the rest of his life in war, and when he passed away, the Guinigi Family conquered the region.

The new rulers were wealthy and decided to build a tower that would serve as a great defensive region should things ever get rough. The tower would not only be a sanctuary, but would also be a portrayal of the wealth and the power they had.

In 1805, Napoleon took over Tuscany and presented the region to his sister Elisa, four years later. Since then, Elisa remained the Grand Duchess of Tuscany until 1814. The beautifully maintained the walls of the tower and plantations along them are only because of Elisa.

In the 1980s, the tower underwent renovation and become open to the public. The rooftop garden can be reached by climbing 230 stairs, which have been added to the tower in recent times. The original stairs were built outside these are on the inside. The top of the tower presents a view of three city walls, the Roman central region of the city and the other towers that remain. Right across is the clock tower or the Torre delle Ore, which can also be climbed.

So visit the grand Torre Guinigi; it is only four Euros per person. Reach the roof, and Lucca will unravel before you, presenting one of the most amazing panoramas in the world. This incredible view alone makes the tower worth a visit, so heed the opportunity if you ever get one.