Almost without exception the first thing which strikes visitors to the Torre di Pisa is the severity of the lean which although familiar to all cannot be properly appreciated from photographs and video footage alone.

The second thing is the breath-taking beauty of this world famous landmark with its Romanesque columns and blind arches.

The Torre di Pisa, also known as the Torre Pendente di Pisa and the Leaning Tower of Pisa, is actually the free-standing bell tower belonging to the Duomo di Santa Maria Assunta (the cathedral) with which the tower shares the Piazza dei Miracoli along with the Baptistery and the Camposanto (ancient cemetery). 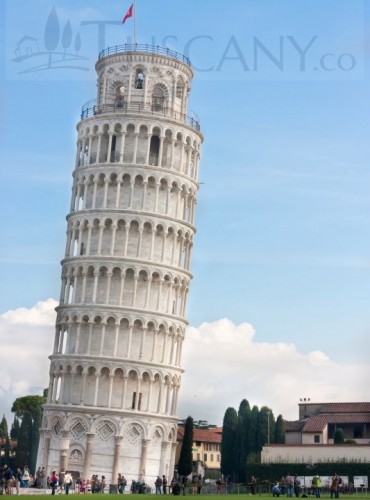 Construction of the Tower

The characteristic lean for which the tower is so famous began almost from the outset due to an inadequate foundation soil into which one side of the tower began sinking. The construction began in 1173 although the identity of the tower’s original designer is not known. The subject is much debated by historians but there is still no conclusive evidence to decide this issue even today.
The sinking and subsequent lean began once the tower’s construction had reached only the second floor.

Shortly after this, continuation of the tower’s construction was halted for 100 years due to an almost continuous period of warfare between the powers of Pisa, Lucca, Genoa and Florence. Historians believe this unintended break in the tower’s construction may have actually saved it as this prolonged period allowed the subsoil to settle before further work began on the tower in 1272.
The architect responsible for the tower during this second phase of building was Giovanni di Simone. A further 4 floors were constructed with instructions from the architect to build the upper floors higher on one side in an effort to correct the lean. This action has actually resulted in the tower exhibiting a curve.

The tower’s construction came to a standstill again in 1284 when the Pisani powers were overthrown by the Genoans in the famous Battle of Meloria. When work on the tower recommenced in 1319 its 7th and final tower floor was completed.

In 1372 the bell chamber was added through the work of designer Tommaso di Andrea Pisano bringing to an end the 200 years of the tower’s construction with a long list of names associated with the many overseers, builders, architects and engineers who had contributed at every stage.

In 1838 during work to expose the base as a walkway, the area flooded and led to an actual increase in the tower’s lean.
Benito Mussolini, Italy’s 20th century dictator, ordered the tower’s tilt to be corrected. As a result concrete was poured into the foundation with the disastrous effect of sinking the tower further into the soil.

During the Second World War occupying Germans took over the tower as an observation point, the fact of which was discovered by the Allies. However, the tower’s beauty so struck the military persons ordered to reconnoitre the situation that artillery bombardment was withheld so as not to destroy the tower.

A plea to save the tower which was issued in the 1960s by the Italian Government led to more than two decades of stabilisation studies and conferences composed of several world experts.

Work finally began in 1990 in an effort to save the tower from toppling while still retaining its characteristic tilt. The final solution involved removing the bells to reduce weight bearing followed by the removal of many tons of soil from under the base of the raised side. When the tower was opened again to the public in 2001 the overall structure had been straightened by 45 cm which meant the tower was again at the same position it had been in 1838.

In 2008 further soil was removed from under the base and engineers declared that for the first time in the tower’s history it had actually stopped moving making it stable for at least two centuries to come.

Angle of tilt – prior to the corrections in the 1990s and 2008 the tower leaned at an angle of 5.5 degrees. Its lean is now 3.99 degrees meaning the top of the tower is displaced from the vertical by 3.9 metres.

Bells – the tower has 7 bells, each with their own name. The earliest, the 5th bell from 1262, pre-dates the tower itself. The newest bell was recast from an old bell in 2004.