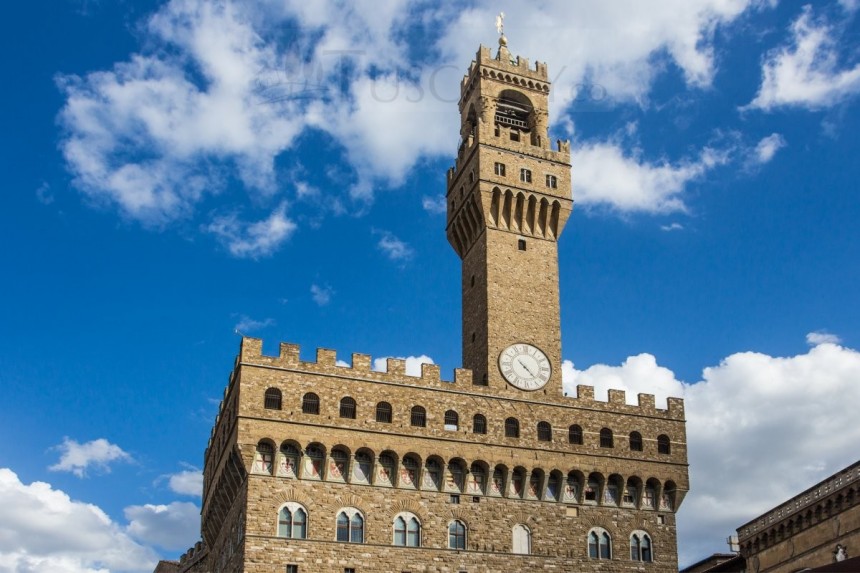 A visit to Florence isn’t complete without touring the Palazzo Vecchio in Piazza della Signoria. This fortress-shaped building with a tower atop its roof is one of the most important buildings in Florence as at different periods it was the home of the Medici family and also the city’s town hall. Today its use is twofold as the seat of Florence’s city council, and also a public museum.

Built at the beginning of the 14th century, the palazzo was designed by architect Arnolfo di Cambio, who also designed the Duomo and Santa Croce church. The tower on top of the palace is named after him, Torre d’Arnolfo (Arnolfo’s Tower). Originally the palace was called Palazzo della Signoria, as “Signoria” was the name of the government of Florence. However, during the Renaissance the powerful Medici family became the ruling body and they decided to make the palace their home.

Suitable enlargements were made to the palace during the Renaissance as the Medici prestige grew. These were made first by architect Giorgio Vasari in the 16th century and then also in the 17th century by Bernardo Buontalenti. Vasari was also commissioned to construct the Vasari Corridor when he was enlarging the palace, and this connected Palazzo della Signoria with Palazzo Pitti, the new Medici residence.

The statue of David, sculpted by Michelangelo, was also given pride of place outside the front entrance, as a statement of the Medici’s political strength.

When the family subsequently moved to Palazzo Pitti some decades later, their former residence took on the name Palazzo Vecchio (Old Palace). But it wasn’t until 1872 that the building was again used as a seat of the municipal government.

Today the Palazzo Vecchio is a popular tourist attraction, as it gives a glimpse into the lives of the Medici family, these most powerful and influential rulers of the Renaissance.